You are here: Home / Bible 805 Podcast / A Critique of anti-supernaturalist scholars AND a very important infographic on incorrect dating of Old Testament beliefs

Hi, I’m Yvon Prehn, and this is an incredibly important podcast, infographic, and video that I discovered I had not loaded up to the Bible805 podcast channel. It started out as added material to the podcast on Life After Death in the Old Testament. In addition to the podcast, I realized I also hadn’t posted this very important infographic that illustrates the critique that follows.

There following it the infographic, the podcast, video, and below them a little longer introduction before the notes of the podcast.

Click on the image to see it larger and the following link to download a PDF of it: HANDOUT of Critique of some scholar’s view of Life After Death in the OT 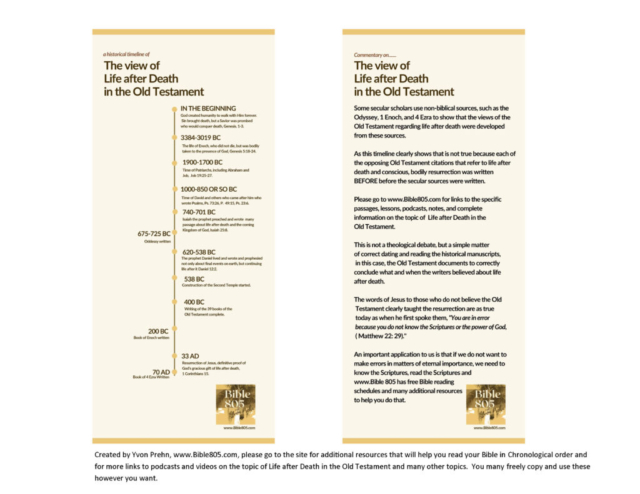 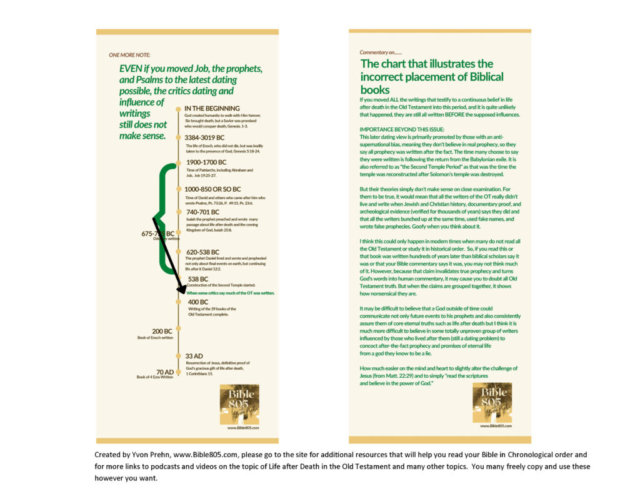 More introductory comments and why this was late in getting posted

In addition to an illustration of this lesson, I realized that the timeline I was putting together to show that faulty beliefs about the views of life after death in the Old Testament applied to much more than that one lesson. I felt at the time it was incredibly important for you to understand this as you study the Bible, but somehow in the last few crazy months with my undergoing major surgery 2 days before Thanksgiving, the usual holiday challenges, and Covid hovering over everything, the podcast and associated materials got lost.

As I was organizing the new year of lessons with added videos, notes, and questions for all, plus the new Resource Shop, I discovered it and found I had not posted it.

I also realized the importance of it in that this podcast not only shows the false conclusions of the scholars who say that people in the Old Testament did not believe in life after death, but it illustrates the bigger picture of why anti-supernaturalist scholars are incorrect in their commentary about the Bible in many areas.

Their mistakes have nothing to do with a belief or not in God or in the supernatural origin of scripture. They are simply about the dating of resources. They will use a source, for example from 70 AD to cite as a reason for a belief that scholars (secular and biblical) universally date hundreds of years earlier. I cannot ascribe motive, I do not know why they do this, but it is sloppy scholarship and misleading.

In my infographics which I discuss in the podcast, you will see the use of 4 Ezra (dated 70 AD) as the source of Old Testament beliefs (dated by even the most secular scholars)that were written almost five hundred years earlier, which obviously did not happen.

The faith of many people has been damaged by quotes from so-called scholars who call into question the supernatural aspects of the Bible based on quoting writers from times that have nothing to do with what they claim. Fortunately, our God can be trusted and if we take the time to simply look up universally agreed-upon dates for writings and then the messages he communicated them through his prophets.

I will mention more examples of the importance of dating various writings as we go through the Bible.

Below are the notes from the lesson.

A brief critique of scholars who don’t believe the Old Testament teaches Life after Death
A continuation of the previous lesson that affirms it.

In the Related lesson

•         I also acknowledged that some scholars do not believe the Old Testament teaches Life after Death.

•         I wanted to pull out a summary of that incorrect belief and refute it.

A brief summary of the incorrect view—only a part, but a fair representation

•         Critics of the Bible state that God did not reveal the existence of an afterlife in the Old Testament; instead, the Jewish people slowly invented it over time.

•         They also state that this idea developed on the basis of interaction with Greek thought (e.g. the Odyssey) and with later writings such as the book of Enoch and 4 Ezra.

•         I will quote their words and then show they are incorrect through a TIMELINE and then QUOTATIONS OF WRITINGS from the Old Testament from the dates in that timeline that clearly show the Old Testament DOES clearly affirm a view of life after death.

•         You do not have to believe the Bible is divinely inspired, you don’t have to believe God can do this, but you cannot deny the clear, written, historically verified documentation of the belief.

Quoted Summary of the false viewpoint

•         To quote a representative example of the false view that the Old Testament does not teach Life after Death: “Most of the scholarly world agrees that there is no concept of immortality of life after death in the Old Testament.”[1]With these words, George Mendenhall summarizes the consensus of critical academics regarding the afterlife in the Hebrew Bible. Even many Jewish thinkers deny an afterlife.

•         Death has no significance… only life matters… In the entire Torah there is not the slightest suggestion that anything happens after death. All the ideas and theories articulated on the subject of a world to come and the resurrection of the dead have no relationship to religious faith. It is sheer folklore. After you die, you simply do not exist.[2]

•         In summary, this quote and many like it argue that the concept of the afterlife was an evolutionary development: God didn’t slowly reveal the subject of Heaven; instead, the Jewish people slowly invented it over time.

My comments on this quote:

•         As you’ll see the OT has far more than “not the slightest” suggestion—the problem is the critics didn’t read it.

•         And Jewish people did not invent the idea—God revealed it—and not slowly, it is there from the earliest book in the Bible as I’ll demonstrate.

•         Professor Meghan Henning, assistant professor of Christian origins at the University of Dayton puts it this way:

•         Prior to the Second Temple period, both Jewish and Greek thought were dominated by the idea that people went to the same space after death and lived a shadowy existence. In the Hebrew Bible this space is called Sheol, and in Greek texts like The Odyssey it is called Hades. …..

•         By the Second Temple period, apocalyptic literature had configured separate spaces for persons both before and after the final judgment, based upon different types of earthly behavior. The final judgment, or day of judgment, refers to a future date on which all of the dead will be raised, souls will be reunited with bodies, and all people and nations will be judged by God. 1 Enoch 22 for instance, describes four containers that souls inhabit while they await judgment. . . . . Similarly, in 4 Ezra 7 readers are confronted with “two ways,” one that is wide and easy and leads to destruction and another that is narrow and difficult and leads to paradise.

•         In summary Prof. Henning proposes that the Jewish view of life after death was influenced by first, the Odyssey and then later writings including 1 Enoch and 4 Ezra.

•         She throws around events and sources most are not familiar with and says it so forcefully we assume she is correct—but she isn’t—as any resource that has dates of these writings show.

•         Let’s look at an objective timeline to analyze the validity of her conclusions.

One more thing…..what about later dating of the Old Testament books?

See the chart on this on www.Bible805.com
Representative quotes from the Old Testament regarding Life after Death

More and links to printables at www.Bible805.com

•         But as the timeline and simple reading of the verses (and there are many, many more that can be cited) shows the firm belief was there from the earliest days throughout Old Testament history.

•         Our only conclusion can be is that the critics did not read the primary historical document of beliefs of the Jewish people—the Old Testament.

The most important application

•         The Bibleverse Shop has printables and eBooks that will help.

To end with a historical challenge: “tolle lege”

•         St. Augustine who later wrote “Our hearts are restless til they rest in Thee,” traced the final step of his conversion to hearing, he thought from children, but later ascribed to the voice of God, “tolle lege, tolle lege.”

•         One later influence being his writings helped Martin Luther understand salvation by grace.

•         God speaks to us still and if you respond to “tolle lege, tolle lege” take up and read—who knows what God might do through you?

For more go to www.Bible805.com