You are here: Home / Bible 805 Podcast / Why it is OK to ask God “Why?” Lessons from the prophet Habakkuk 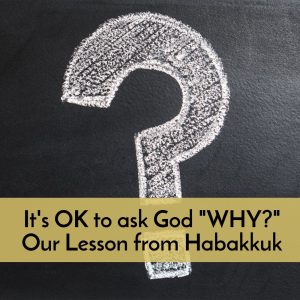 Is it OK to ask God “why?”
Why do you allow evil?
Why do evil people get away with things?
Why do good people get caught up in the mess others make?
In this podcast we’ll look at the prophet Habakkuk and what happened when he not only asked God “Why?” but when he kept asking God when he didn’t like how God answered him the first time.
Click on the following link to download a PDF of the notes, below they are printed out: NOTES of HABAKKUK

·          Today we’ll look at the prophet Habakkuk and what happened when he not only asked God “Why?” but when he kept asking God when he didn’t like how God answered him the first time.

·          Habakkuk is a fascinating book, but Before we get into answering these questions, let’s look at the form of the book before we look at the content

·          Job is another example, so are some of the writings of Paul in the New Testament

·          When people talk about “hearing from God” it can either be a sign of delusional self-deception or the natural outgrowth of an intimate and real relationship with God.

·          Hearing God by Dallas Willard, deep & thought-provoking, but useful for further study—obviously so much in the book, but let me read you one quote from the introduction:

·          Hearing God? A daring idea, some would say—presumptuous and even dangerous. But what if we are made for it? What if the human system simply will not function properly without it? There are good reasons to think it will not. The fine texture as well as the grand movements of life show the need. Is it not, in fact, more presumptuous and dangerous to undertake human existence without hearing God?

·          Consider—conversation with God
this is how we ought to live

·          It will be restored as John looks forward in the book of Revelation 21:3 “Look! God’s dwelling place is now among the people, and he will dwell with them. They will be his people, and God himself will be with them and be their God.”

·          Where do we turn for answers, not only to daily actions of life, but to the big questions of personal or national tragedy?

·          Previous to this time, the prophets preached and challenged Israel to repentance

·          Repentance no longer preached for the nation of Israel

·          627: Jeremiah begins his prophetic ministry to Southern Kingdom of Judah
621: Rediscovery of Book of Law which had been lost in House of God! Josiah’s reformation (but not lasting revival)

·          609: Death of godly King Josiah, interfering in the conflict between Egypt who was moving north to help Assyria and Babylon, who was intent on world power

·          605: Nebuchadnezzar defeats Pharaoh Necho of Egypt at Battle of Carchemish = “the turning point of world history” Egypt and Assyria no longer world powers

·          Hab. 1: How long, Lord, must I call for help,
but you do not listen?
Or cry out to you, “Violence!”
but you do not save?
3 Why do you make me look at injustice?
Why do you tolerate wrongdoing?
Destruction and violence are before me;
there is strife, and conflict abounds.
4 Therefore the law is paralyzed,
and justice never prevails.
The wicked hem in the righteous,
so that justice is perverted.

·          “Look at the nations and watch—
and be utterly amazed.
For I am going to do something in your days
that you would not believe,
even if you were told.
6 I am raising up the Babylonians,
that ruthless and impetuous people,
who sweep across the whole earth. . . . . .
.. .They laugh at all fortified cities;
by building earthen ramps they capture them.
11 Then they sweep past like the wind and go on—
guilty people, whose own strength is their god.”

·          A break here….. Babylon was a NEW power on the world stage.
Assyria had been the big bully, the conquering nation Remember power and brutality of Assyria?

·          Their destruction prophesied by Nahum, here we see fulfillment

·          Hab. 1: 12 Lord, are you not from everlasting?
My God, my Holy One, you will never die.
You, Lord, have appointed them to execute judgment;
you, my Rock, have ordained them to punish.
13 Your eyes are too pure to look on evil;
you cannot tolerate wrongdoing.
Why then do you tolerate the treacherous?
Why are you silent while the wicked
swallow up those more righteous than themselves?
. . . . .
17 Is he to keep on emptying his net,
destroying nations without mercy?

·          And so it is OK to continue to question, but at the same time to respectfully “wait quietly” as Habakkuk did

·          Great advice in many spiritual situations from life to not understanding something in the Bible: My seminary OT Prof. “It is my problem if I don’t understand, so wait for an answer.”

·          Hab. 2:2 “Write down the revelation
and make it plain on tablets
so that a herald may run with it.
3 For the revelation awaits an appointed time;
it speaks of the end
and will not prove false.
Though it linger, wait for it;
it will certainly come
and will not delay.

·          Babylon did conquer Assyria, and took Judah captive, but its empire lasted only 80 years and it too was gone and the people taken captive were returned to their homeland

·          I heard and my heart pounded,
my lips quivered at the sound;
decay crept into my bones,
and my legs trembled.
Yet I will wait patiently for the day of calamity
to come on the nation invading us.
17 Though the fig tree does not bud
and there are no grapes on the vines,
though the olive crop fails
and the fields produce no food,
though there are no sheep in the pen
and no cattle in the stalls,
18 yet I will rejoice in the Lord,
I will be joyful in God my Savior.

·          We may not be able to rejoice in circumstances, but we can always rejoice in God

·          To live by faith as Habukkuk affirmed those who walk we God need to do in the challenges of life, look at the stories in Heb. 11

·          LB: What is faith? It is the confident assurance that something we want is going to happen. It is the certainty that what we hope for is waiting for us, even though we cannot see it up ahead.

·          This phrase: It is the confident assurance that something we want is going to happen.

·          There is absolutely no textural support for this comment, NONE! It’s a terrible translation

·          NIV:11:1 Now faith is confidence in what we hope for and assurance about what we do not see. 2 This is what the ancients were commended for.

·          To live by faith, means to see present events in the light of God’s eternal plans and to trust God in them and LIVE like we believe Him

·          Things did not always go well for the heros of the faith that Hebrews 11 describes, we will look at some examples in a minute

·          They lived their life, made decisions and actions on the God’s ultimate plan of salvation and their future with Him, not on only what they wanted in the here and now

·          Heb. 11:8 By faith Abraham, when called to go to a place he would later receive as his inheritance, obeyed and went, even though he did not know where he was going. 9 By faith he made his home in the promised land like a stranger in a foreign country; he lived in tents, as did Isaac and Jacob, who were heirs with him of the same promise. 10 For he was looking forward to the city with foundations, whose architect and builder is God.

·          Heb. 11:24 By faith Moses, when he had grown up, refused to be known as the son of Pharaoh’s daughter. 25 He chose to be mistreated along with the people of God rather than to enjoy the fleeting pleasures of sin. 26 He regarded disgrace for the sake of Christ as of greater value than the treasures of Egypt, because he was looking ahead to his reward. 27 By faith he left Egypt, not fearing the king’s anger; he persevered because he saw him who is invisible.

·          Heb. 11:13 All these people were still living by faith when they died. They did not receive the things promised; they only saw them and welcomed them from a distance, admitting that they were foreigners and strangers on earth. 14 People who say such things show that they are looking    for a country of their own. 15 If they had been thinking of the country they had left, they would have had opportunity to return.16 Instead, they were longing for a better country—a heavenly one. Therefore God is not ashamed to be called their God, for he has prepared a city for them. . . . . . . 39 These were all commended for their faith, yet none of them received what had been promised.

·          They trusted in GOD  and his future for them—their vision, orientation of life was of faith, no matter what their present troubles or world situation or their calling in it.

·          In all of our trying times, it is OK—more than that, we are encouraged to question, to talk to God about anything

·          Pray not always to get our way, but to live in no matter what our circumstances in a way that is pleasing to Him—LIVE THROUGH Challenges—represent Him well—don’t always look for a way around them

Through the Bible in a Year Episodes