You are here: Home / Bible 805 Podcast / Through the Bible / Two New Podcasts and Videos—How do you become someone God approves of? How do God’s Sovereignty and Human Free Will Interact? 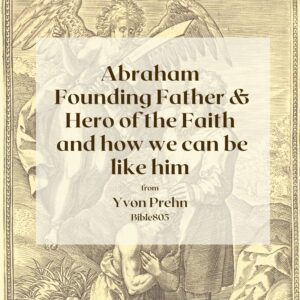 As we continue our study of Genesis, the lesson, podcast and video, Abraham Founding Father & Hero of the Faith and how we can be like him,  will teach you what it was in his life that made him pleasing to God and how we can follow his example.

This lesson also has a background discussion of Ur of the Chaldees, the civilization Abraham left when he was called to the Promised Land. On the video you can see a series of pictures of the archeological site, artifacts from the city, as well as the story of its discovery. It’s a fascinating one, not only because it gives us solid evidence of the authenticity of this early Biblical character but shows us realistically what he left behind.

Contrary to what I assumed in the past, (and maybe many of you did also) Abraham did not simply leave one pastoral community and move to another pastoral community. The picture in my mind was of a Biblical character like we see in Sunday School lessons moving from one tent in the wilderness to another.

The reality could not have been further from the truth!

A modern-day equivalent would be like moving from an urban area like Los Angeles to the middle of the Mojave Desert. We see that when we see the ruins of the city of Ur, the homes, the gold weapons and artwork, and even in the smaller items like the jewelry and cosmetic pots of the women. Check out the video for pictures of these. VIDEO.

Amid the wealth and beauty of the civilization, we also see a religion that required the mass deaths of dozens of servants and animals who died where they stood after walking into the large tombs.

Abraham left all that to go to a land he knew nothing about, where his life was a series of testing and trials, of acts of faith and sad failures, but that ultimately was one that not only pleased God because Abraham believed God, but also one where God called Abraham his friend.

To listen to the podcast, CLICK HERE  or go to whatever podcast service you prefer, just look for Bible805.

To watch the video, (and PLEASE SUBSCRIBE to the channel) go here: https://youtu.be/eIsgQP-OSD0

How this one person of faith became a nation is in the next lesson: From a person to a people: Abraham, Isaac, Jacob, and Joseph plus, a discussion of God’s sovereignty vs. man’s responsibility

Though God cares about the fate of all humanity and is actively involved with them throughout history (as we see in scattered pictures in scripture), the Biblical narrative in Genesis now narrows down to one person, one family that becomes the one nation through whom God will entrust his Word and ultimately will bring the prophesied Savior into the world.

This story of the chosen people starts with Abraham, Isaac, Jacob, and Joseph, whose lives are discussed in this lesson.

In addition to reviewing their lives, the lesson helps us understand the interactions between God’s control of everything, what we often refer to as God’s sovereignty and human free will. In summary, God’s plan will always ultimately prevail, but how particular humans get to the end-point of His will and their lives leaves much to human free will.

As we learn from the examples of these patriarchs of the faith and will continue to learn as we go through the Old Testament, good decisions make for a more pleasant journey; bad decisions have consequences, but always God acts towards His people with grace and His plan for humanity’s salvation moves forward.

To listen to the podcast, CLICK HERE  or go to whatever podcast service you prefer, just look for Bible805.

To watch the video, (and PLEASE SUBSCRIBE to the channel) go here: https://youtu.be/QFYrLT3zzlc