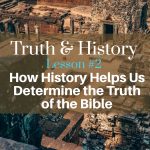 Isn’t the Bible full of errors? Hasn’t it been copied so many times nobody has any idea what the original was? HOW can history help us decide what’s true and what isn’t?

Answering those questions is what this podcast is about.

Here is the chart I talk about in the podcast. Click on it to download a PDF of it. 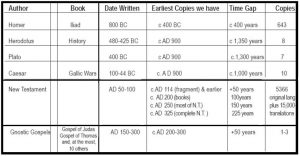 As I was thinking about it, I realized history is like an anchor. Just as an anchor keeps a ship from floating off in any direction, so too, history can help tie what we believe to what happened in the real world, outside the pages of a sacred text.

To continue the analogy, history helps answer questions like:
**When were the scriptures written?
**Who wrote them?
**Where were they written?

These answers form historical links in the chain of the anchor that goes from the real world to the text we have today–and we’ll answer them in the podcast.

But how does history answer these questions?

Finding the links in the chain, the answers to our questions aren’t difficult or scholarly and hard to understand. History is concrete and straightforward at its core. By looking at what was found with ancient documents in elements as simple as the pottery that the scrolls were stored in and the coins left around them, plus looking at what the scribes used as writing materials and how they wrote, it’s easy to identify when they were written.

Following is the chart that is talked about in the podcast that shows the number of Bible manuscripts compared with other historical sources. Click on it to download the PDF.

Show notes, an outline of the script of the podcast, not a transcript

Truth & History
Lesson Two:  How History Helps Us Determine the Truth of the Bible

Isn’t the Bible full of errors? Hasn’t it been copied so many times nobody has any idea what the original was? HOW can history help us decide?

History as an anchor

•              As I was thinking about it, I realized history is like an anchor. Just as an anchor keeps a ship from floating off in any direction, so too, history can help tie what we believe to what actually happened.

•              In many instances, archeology discovered collections of documents like the Dead Sea Scrolls, hidden in a cave.

•              Easy to date pottery for those familiar with it, just like when you go to a second-hand store—easy to see 70’s dishes are often olive green, grandmothers’ dishes have flowers on them, more contemporary ones are pure white.

•              For example Pottery decorated with a style consistent with the early Philistines from 1200 to about 1000 was prominently featured Mycean art and images of a seafaring people.

•              In the time of the divided kingdom in Israel and Judah, each kingdom had its own distinctive pottery.

•              As we get closer to the time of Christ the black and red-glazed pottery we often see in pictures of Greek archeological times was popular for the more wealthy.

•              Some of the Dead Sea Scrolls were found in pottery that was found in only one other place in excavations of that time–at Qumran–which was one of the reasons why they tied the scrolls to that community.

•              Coins are key because the various emperors and other rulers usually had their image stamped on their coins when they came into power.

•              So if you found a cave with coins stamped with the image of Caesar Augustus and earlier emperors and none of the later ones, you could say that things were placed in the cave probably around the time he was emperor.

Geography—important, WHERE did the events written about take place?

•              Does the archeology of that place verify the account of it in the religious writings?

•              You might think that is obvious, but not every faith system has either identifiable places or descriptions of what happened and when it happened in the way the Bible does—more about that in the next lesson.

Did anybody else write about it?

•              The past is little different. If something was considered important (and probably true) many people outside the original author would comment on it.

•              One or two accounts, even though they may claim to be from a divine source, if they have no verification outside the community that produced them aren’t as trustworthy.

•              This is especially true if the people writing about a person or group were hostile to it. Some of the most interesting verification we have of the importance of the concerns for hurting people in the early church is that there are numerous writings by the enemies of Christianity lamenting how the Christians, “not only take care of their own poor, but ours as well” and how when a Roman would leave a newborn child to die on the trash heap outside town, which was perfectly legal and often happened to excess female children, the Christians would rescue the baby and raise the child

•              We have all these ways of determining the date and truthfulness of documents by things that surround them, but what about the documents themselves?

Let’s look at the Manuscripts themselves for dating information

•              For a document to have historical truth, the historical anchors that tie it to the truth, to what really happened in the physical world, should have these characteristics:

•              Wee are not trying to define the truth of any faith system at this time. You must draw your own conclusions—What we are looking at now (and more in the next lesson) is to look at the evidence to determine what documents are most historically valid.

Uncial is written entirely in capital letters commonly used from the 1st to 8th centuries AD by Latin and Greek scribes.

So what do we find?

Here are some of the manuscripts we have:

Not only do we have fragments, but we have 3 complete Bibles very early

•              Authorship—stated eyewitness accounts, early enough to be disputed by people who actually saw the events and that are verified extensively in non-biblical sources

•              The credibility of the author—goes along with early dating. Something claiming to be written by the Apostle Thomas, but was dated written hundreds of years after he lived, obviously wasn’t written by him.

•              Authenticity or corruption of the text—if we have more than one copy, how many copies, and how well do the copies agree, again thousands of copies are out there of the Biblical texts that can be dated very early.

•              Did all these copies change over time? Are the copies different? Have they been copied so many times, original meaning lost?

Why are they so significant? It’s because they date back to just after the time of Christ and when compared with medieval and modern manuscripts, NO SIGNIFICANT variation.

Nor is there variation from the earliest copies until now or differences between them other than very minor ones.

•              What we have today in our Bible is what was recorded soon after the events and is essentially the same as when it was written!

Keep in mind as we go forward

•              Esoteric, hidden, or a field requires any advanced intelligence to understand—pretty simple actually.

•              Historical evidence that confirms the usefulness of the true manuscript dating is still a long way from asserting God as the author of the Bible and believing everything in it, but it’s very hard to even begin that journey if you can’t trust the documents. . . . . and it’s a great start!

Where we will go from here

That’s all for now,

•              May you know the invitation of God, to move
-from confusion to clarity
-from wandering to rest
-from loneliness to knowing you are loved
-from turmoil to peace
From wherever you are on your spiritual journey to a growing knowledge of God’s Word and in your personal relationship with the Father, Son and Holy Spirit . Amen

•              Why is the historical reliability of the Bible important to how you interact with people who don’t know Jesus?

•              Why is the historical reliability of the Bible important to you personally?