You are here: Home / Bible 805 Podcast / The last days of Israel and what they teach us about Truth, history, and the importance of obeying God 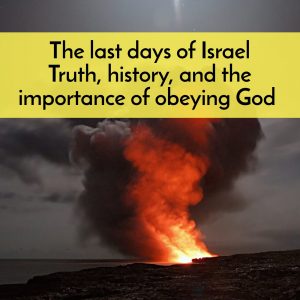 Does it matter if the stories in the Bible really happened? Isn’t the important thing the spiritual truth taught in them?
It seems to be a common belief today that objective facts aren’t nearly as important as how we feel about our spiritual beliefs, but as you’ll learn today our Bible is based on historical realities and God cares very much about how we live our lives based on those realities.

To download the notes from this podcast, click on the following link: CLASS NOTES Fall of Israel

The complete notes are also below.

The last days of Israel and what they teach us about truth, history, and the importance of obeying God

Why is knowing what we study is true history important?

Review from Truth and History series:
Truth Corresponds to Reality

•           Definition of Truth: “the body of real things, events, and facts; the property of being in accord with fact or reality” Merriam-Webster Dictionary

History is one option

•           Foundational—because for any religion to be true theologically, it should also have a true historical basis.

•           Every religion requires that believers accept more than facts, and have faith.

•           The historical facts of any religion should be true; they should  correspond to reality.

The Christian faith claims it does

–        “In those days Caesar Augustus issued a decree that a census should be taken of the entire Roman world. Luke 2:1”

–        “In the fourteenth year of King Hezekiah’s reign, Sennacherib king of Assyria attacked all the fortified cities of Judah and captured them. Kings 18:13”

•           On Sennacherib’s Prism, he says this of Hezekiah: “As for the king of Judah, Hezekiah, who had not submitted to my authority, I besieged and captured forty-six of his fortified cities, along with many smaller towns, taken in battle with my battering rams . . . As for Hezekiah, I shut him up like a caged bird in his royal city of Jerusalem.

More on the historical basis for the Assyrian empire

•           In 1845 the young British diplomat Austen Henry Layard explored the ruins. Layard did not use modern archaeological methods; his stated goal was “to obtain the largest possible number of well-preserved objects of art at the least possible outlay of time and money”

•           In the Kuyunjik mound, Layard rediscovered in 1849 the lost palace of Sennacherib with its 71 rooms and colossal bas-reliefs. He also unearthed the palace and famous library of Ashurbanipal with 22,000 cuneiform clay tablets.

One of the winged bull gates

Excavations still being done when and where possible from 2008

•           17 1-2 In the twelfth year of Ahaz king of Judah, Hoshea son of Elah became king of Israel. He ruled in Samaria for nine years. As far as God was concerned, he lived a bad life, but not nearly as bad as the kings who had preceded him.

•           3-5 Then Shalmaneser king of Assyria attacked. Hoshea was already a puppet of the Assyrian king and regularly sent him tribute, but Shalmaneser discovered that Hoshea had been operating traitorously behind his back—having worked out a deal with King So of Egypt. And, adding insult to injury, Hoshea was way behind on his annual payments of tribute to Assyria. So the king of Assyria arrested him and threw him in prison, then proceeded to invade the entire country. He attacked Samaria and threw up a siege against it. The siege lasted three years.

•           6 In the ninth year of Hoshea’s reign the king of Assyria captured Samaria and took the people into exile in Assyria. He relocated them in Halah, in Gozan along the Habor River, and in the towns of the Medes.

•           7-12 The exile came about because of sin: The children of Israel sinned against God, their God, who had delivered them from Egypt and the brutal oppression of Pharaoh king of Egypt. They took up with other gods, fell in with the ways of life of the pagan nations God had chased off, and went along with whatever their kings did. They did all kinds of things on the sly, things offensive to their God, then openly and shamelessly built local sex-and-religion shrines at every available site. They set up their sex-and-religion symbols at practically every crossroads. Everywhere you looked there was smoke from their pagan offerings to the deities—the identical offerings that had gotten the pagan nations off into exile. They had accumulated a long list of evil actions and God was fed up, fed up with their persistent worship of gods carved out of deadwood or shaped out of clay, even though God had plainly said, “Don’t do this—ever!”

•           13 God had taken a stand against Israel and Judah, speaking clearly through countless holy prophets and seers time and time again, “Turn away from your evil way of life. Do what I tell you and have been telling you in The Revelation I gave your ancestors and of which I’ve kept reminding you ever since through my servants the prophets.”

•           2 Kings 7: 14 But they would not listen and were as stiff-necked as their ancestors, who did not trust in the Lord their God. 15 They rejected his decrees and the covenant he had made with their ancestors and the statutes he had warned them to keep. They followed worthless idols and themselves became worthless.

•           2 Kings 17:16 They forsook all the commands of the Lord their God and made for themselves two idols cast in the shape of calves, and an Asherah pole. They bowed down to all the starry hosts, and they worshiped Baal. 17 They sacrificed their sons and daughters in the fire. They practiced divination and sought omens and sold themselves to do evil in the eyes of the Lord, arousing his anger.

•           24 The king of Assyria brought people from Babylon, Kuthah, Avva, Hamath and Sepharvaim and settled them in the towns of Samaria to replace the Israelites. They took over Samaria and lived in its towns.

•           25 When they first lived there, they did not worship the Lord; so he sent lions among them and they killed some of the people. 26 It was reported to the king of Assyria: “The people you deported and resettled in the towns of Samaria do not know what the god of that country requires. He has sent lions among them, which are killing them off, because the people do not know what he requires.”

•           2 Kings 17:29 Nevertheless, each national group made its own gods in the several towns where they settled, and set them up in the shrines the people of Samaria had made at the high places.30 The people from Babylon made Sukkoth Benoth, those from Kuthah made Nergal, and those from Hamath made Ashima; 31 the Avvites made Nibhaz and Tartak, and the Sepharvites burned their children in the fire as sacrifices to Adrammelek and Anammelek, the gods of Sepharvaim. 32 They worshiped the Lord, but they also appointed all sorts of their own people to officiate for them as priests in the shrines at the high places. 33 They worshiped the Lord, but they also served their own gods in accordance with the customs of the nations from which they had been brought.. . . . . 40 They would not listen, however, but persisted in their former practices. 41 Even while these people were worshiping the Lord, they were serving their idols. To this day their children and grandchildren continue to do as their ancestors did.

•           A new prophet used the example of a Samaritan to illustrate what it meant to live out the greatest commandment (to love God and neighbors), Luke 10:25-37

•           Our application: no matter what our history, Jesus can use us to bring his message of salvation to our world