You are here: Home / Bible 805 Podcast / Through the Bible / 1 Samuel / Saul, the first king of Israel, lessons and challenges from his life 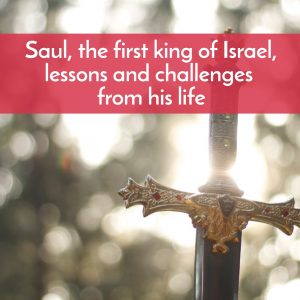 How does it happen for a person to start out with every advantage—good looks, honor and a calling from God, a great family, but then die a self-pitying suicide? Saul, the first king of Israel, sadly answers that question in our lesson as we start the great adventure of studying the kings of Israel.

This week is a challenge and warning, but after this lesson on what not to do by looking at the life of Saul we will then study the life of David and Psalms and learn what it means to be a person after God’s heart. Below the podcast you can read the notes or print off a PDF.

Click the following link to download the notes from the podcast: Notes on Saul, the First King of Israel

Saul, the first king of Israel, lessons and challenges from his life

We are going to look at the life of Saul, the first king of Israel

•       He is a useful lesson because he had everything that is often seen as important for success: great looks and build, a powerful job, family

•       Today we’ll look at how that happened, what and how we can avoid his mistakes

•       Remember not everything the Bible talks about is a good example, sometimes the bad ones teach us

•       ALWAYS IMPORTANT because we don’t want to pull characters or lessons of out the Bible without:

•       #2 REMEMBERING all the Bible is part of one great story—that of God redeeming humanity from their rebellion and working towards paradise restored when God’s kingdom will come, and he will again walk with his people. . … But a lot has happened and will happen before that takes place.

Bible review so far—Podcasts on all available at Bible 805.com; iTunes, and many other podcast sources

•       Genesis: Start of humanity created in a perfect setting to walk with God

•       Sin destroyed their relationship and their world

•       Back to Genesis: The Flood; focus on one line after it—Semites

•       Further to Call of Abraham, Isaac, Jacob –family to Egypt and where for 400+ years they become a nation

•       Judges: everyone does what is right in their own eyes and it wasn’t pretty—sin, bondage, deliverance cycle—great heroes like Gideon, Deborah, Sampson

•       Led people after ark stolen and Tabernacle at Shiloh destroyed

•       Judged Israel on a circuit; started a school of prophets

•       When Samuel grew old, he appointed his sons as Israel’s leaders. The name of his firstborn was Joel and the name of his second was Abijah, and they served at Beersheba. But his sons did not follow his ways. They turned aside after dishonest gain and accepted bribes and perverted justice.

•        So, all the elders of Israel gathered together and came to Samuel at Ramah.  They said to him, “You are old, and your sons do not follow your ways; now appoint a king to lead us, such as all the other nations have.” 1 Sam. 8:1-5

The people ask for a King

•       Prophesied they would have a King in Jacob’s blessing (prophecies) of his sons:

•       The scepter will not depart from Judah,
nor the ruler’s staff from between his feet,
until he to whom it belongs shall come
and the obedience of the nations shall be his. Genesis 49:10

•       But their reason was wrong; perhaps timing

•       God gave them what they asked for after assuring Samuel they were rejecting God, not him

Lesson: “Be careful what you ask for because you might get it.”

•       They wanted a king; they got a king, years of fighting, civil war followed

•       Develop a conversational time of prayer and journaling with God

•       You can talk over possible solutions, but leave it open for God to work

•       In circumstances and in changing your desires

•       He sees the BIG PICTURE of our lives, his purpose, purpose for all—really makes much more sense to trust than to simply demand what we want

•       Not much happens until challenge to city of Jabesh

•       Threat; Saul answers, raises an army and rescues them

•       His kingship is confirmed, and Samuel retires from leadership

•       For the sake of his great name the Lord will not reject his people, because the Lord was pleased to make you his own.  As for me, far be it from me that I should sin against the Lord by failing to pray for you. And I will teach you the way that is good and right.  But be sure to fear the Lord and serve him faithfully with all your heart; consider what great things he has done for you. Yet if you persist in doing evil, both you and your king will perish.” 1 Samuel 12:22-25

•       Army assembled at Gilgal; waited for Samuel to come to offer sacrifices

•       Saul gets impatient—he offers the sacrifice and Samuel shows up

•       Saul doesn’t repent—excuses, “I felt compelled to offer the sacrifice.”

•        “You have done a foolish thing,” Samuel said. “You have not kept the command the Lord your God gave you; if you had, he would have established your kingdom over Israel for all time. But now your kingdom will not endure; the Lord has sought out a man after his own heart and appointed him ruler of his people, because you have not kept the Lord’s command.” I Sam. 13:13-14

What was so wrong

•       Did not repent of his actions, offered excuses

Application #1 Always play to an audience of ONE

•       Clear guidance from God, should have kept his eyes on Him—no matter what

•       Example of Shadrach, Meshach, Abednego— “God able to deliver us, but even if he does not, we will now bow down” Daniel 3

•       NEVER waiver from it—you won’t have to decide each time which way you will go, what you will do

•       If clear guidance from God in his Word, or in a personal way for you obey what he tells you

Application #3: know YOUR calling and focus on it

•       God’s punishments severe if disobeyed, as Saul did

Sadly, he did not learn from this

•       1 Sam 15—Commanded to destroy Amalekites AND all livestock, everything—like command to destroy Jericho

•       Saul wins the victory but kept many of the spoils—obviously God sees this….

•       Then the word of the Lord came to Samuel: “I regret that I have made Saul king, because he has turned away from me and has not carried out my instructions.” Samuel was angry, and he cried out to the Lord all that night. I Sam 15:10-11

•       Saul excuses, blames the army, did it for God to be able to sacrifice to Him

•       “Does the Lord delight in burnt offerings and sacrifices as much as in obeying the Lord?
To obey is better than sacrifice,
and to heed is better than the fat of rams.
For rebellion is like the sin of divination,
and arrogance like the evil of idolatry.
Because you have rejected the word of the Lord,
he has rejected you as king.” 1 Samuel 15:22-23

David appears on the scene

•       Kills Goliath, Saul should have been the champion, but no spiritual strength

•       David knew the true battle Goliath “defied the armies of the living God.”

•       Saul deteriorates in jealousy and rage

•       Saul desperate for guidance, goes to see the Witch of Endor to call up the spirit of Samuel

•       She reminds him Saul has forbidden what asks

•       “The Lord has done what he predicted through me. The Lord has torn the kingdom out of your hands and given it to one of your neighbors—to David. 18 Because you did not obey the Lord or carry out his fierce wrath against the Amalekites, the Lord has done this to you today.19 The Lord will deliver both Israel and you into the hands of the Philistines, and tomorrow you and your sons will be with me. The Lord will also give the army of Israel into the hands of the Philistines.” 1 Sam. 28:17-19

•       Important note: Saul committed suicide but told in advance that “You and your sons will be with me.”

•       Suicide a sad ending, but not the unforgiveable sin.

•       To pass the tests of life and finish strong, like preparing for a test

•       Prepare ahead—live NOW as you know God wants you to—listen last week to the How to love Jesus and especially those guidelines for life from St. Benedict and Johnathan Edwards

•       “Never to do anything which I should be afraid to do if it were the last hour of my life.” Johnathan Edwards

•       Many prepare financially or for disasters, but spiritual preparation for each day and for all of life is so important

•       Don’t worry about anything; instead, pray about everything; tell God your needs, and don’t forget to thank him for his answers.  If you do this, you will experience God’s peace, which is far more wonderful than the human mind can understand. His peace will keep your thoughts and your hearts quiet and at rest as you trust in Christ Jesus. Phil. 4:6-7

•       In preparing for this test, this final exam, we have a great Tutor

•       3 I thank my God every time I remember you. 4 In all my prayers for all of you, I always pray with joy5 because of your partnership in the gospel from the first day until now,6 being confident of this, that he who began a good work in you will carry it on to completion until the day of Christ Jesus.