You are here: Home / Bible 805 Podcast / My Way or God’s Way—books of Judges & Ruth shows us the results 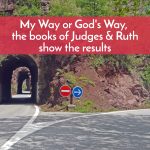 There is a very popular song boasts “I did it my way!”

Though it sounds so appealing, to live our lives exactly how we want, is this really the best way to live?

Today we’ll look at what the book of Judges that shows us over 300 years of Israel’s history and what happened when they did exactly that.
Those events are told honestly in that story, as that is what the Bible does, make Judges is one of the most difficult books of the Bible to read.

Though it has the stories of some familiar names like Sampson, Gideon, and Deborah, who accomplished great things for God, the book fills in the details of their lives, some of which weren’t all that great. In between these well-known characters are also the stories of a number of other Judges who also led Israel for a time.

The span of the book is over 300 years and the entire book is a sad cycle of sin, oppression, crying out to God, God saving them through a Judge, a time of peace, and then falling back into sin and starting the cycle all over again because as the book ends up saying, it was a time where “everyone did what was right in their own eyes.”

In the midst of this book we also read the story of Ruth, who lived during the time of Gideon and her story shows us that no matter how bad things might be or how crazy our world becomes, there will always be people who choose to serve God and who protects and honors.

Judges and Ruth show us there will always be two ways to live–God’s way or our way. The lesson ends with sharing perhaps why we don’t choose God’s way and the reasons why his ways are always best. They may not be the easiest, but they are the way to true joy and peace.

Below the podcast is a downloadable PDF of the notes for the podcast and a print-out of them.

Click the following link to download the notes for this class:  Notes for Book of Judges and Ruth

The Great Story of Salvation

My Way or God’s Way—book of Judges

•           The Great Story of Salvation, and then the individual chapters of it

•           Through the Bible in Chronological Order is a daunting title

•           And as I was thinking and praying what else to call it, I realized it really is a story, a story of redemption

•           I wrote a book on church marketing years ago that I started in what I’m going to read you in a minute, and I think this sums up well the change in the title

•           Because many people outside the church have our story wrong. The ending of the gospel story for believers in Jesus is truly to live happily ever after. There will be trials on the journey, but the trials will end. Heaven is a certainty. All wrongs will be righted, all hurts healed. Rewards will be given for every kind and brave deed. All heaven will applaud.

•           Without that hearing, people believe distorted stories. The God of love and compassion is portrayed as a despot arbitrarily inflicting pain on people the same way a small boy tortures bugs. Other false reports assert He’s lost interest and has walked away, leaving His children to fight and squabble without hope of justice or resolution. In the saddest tale of all some people don’t believe their lives are part of any story, but simply a blot of sadness, scribbled without hope and shortly erased.

•           Some of the favorite characters of Bible Stories: Gideon, Sampson, Deborah and others we aren’t as familiar with

•           Though great actions by individuals, need to put it in context, so we don’t just see them as isolated heroic characters

Source for some Comments and Notes

Joshua died and passed on leadership to…….

•           Judges 2:7 The people served the Lord throughout the lifetime of Joshua and of the elders who outlived him and who had seen all the great things the Lord had done for Israel.

•           10 After that whole generation had been gathered to their ancestors, another generation grew up who knew neither the Lord nor what he had done for Israel.

•           Judges 2:1 Then the Israelites did evil in the eyes of the Lord and served the Baals. 12 They forsook the Lord, the God of their ancestors, who had brought them out of Egypt. They followed and worshiped various gods of the peoples around them. They aroused the Lord’s anger 13 because they forsook him and served Baal and the Ashtoreths. 14 In his anger against Israel the Lord gave them into the hands of raiders who plundered them. He sold them into the hands of their enemies all around, whom they were no longer able to resist. 15 Whenever Israel went out to fight, the hand of the Lord was against them to defeat them, just as he had sworn to them. They were in great distress.

But God Didn’t Abandon his people

•           Then the Lord raised up judges, who saved them out of the hands of these raiders. 17 Yet they would not listen to their judges but prostituted themselves to other gods and worshiped them. They quickly turned from the ways of their ancestors, who had been obedient to the Lord’s commands.18 Whenever the Lord raised up a judge for them, he was with the judge and saved them out of the hands of their enemies as long as the judge lived; for the Lord relented because of their groaning under those who oppressed and afflicted them. 19 But when the judge died, the people returned to ways even more corrupt than those of their ancestors, following other gods and serving and worshiping them. They refused to give up their evil practices and stubborn ways.

•           20 Therefore the Lord was very angry with Israel and said, “Because this nation has violated the covenant I ordained for their ancestors and has not listened to me, 21 I will no longer drive out before them any of the nations Joshua left when he died. 22 I will use them to test Israel and see whether they will keep the way of the Lord and walk in it as their ancestors did.”

For our story: Challenge to us

Highlights of a few of the Judges

•           “The monotony of Israel’s sins can be contrasted with the creativity of God’s methods of deliverance.” WW

•           Short mentions of them—some very wealthy with large families, some tidbits: “Shamgar who struck down 600 Philistines with an ox goad”

•           Jephthah—clarify his story, an illegitimate son, called to be a leader, vowed to give to the Lord whatever came out of his house when returned victorious—his only daughter—did not sacrifice as to kill her, dedicated her to perpetual service, virginity in God’s service—cutting off his line.

•           Definition of a biblical Judge: ruler, military leader, one who decided in judicial matters, over limited areas. No income or taxing power, not a hereditary office. Called and empowered by God

•           Caleb’s nephew and son-in-law—early in the book, proved to be a successful warrior—won city, won Caleb’s daughter.

•           The Spirit of the Lord came on him [Othniel], so that he became Israel’s judge and went to war. The Lord gave Cushan-Rishathaim king of Aram into the hands of Othniel, who overpowered him. 11 So the land had peace for forty years, until Othniel son of Kenaz died. Judges 3:10-11

•           Pattern – oppression, prayer, God answers, peace while the judge lives and then it repeats

•           God called her to deliver people, she summons Barak, who is victorious, but ends with the opposing general killed by Heber the Kenite (relatives of Moses)

•           Also, descendants of Abraham, the people Moses fled to, but something had gone very wrong

•           Gideon protests—if God is with us, why all the problems? Angel doesn’t answer, simply calls him to be the deliverer.

•           Lesson here—if you don’t think you have the resources to do what God wants –that might be precisely the point, precisely where God wants you to be

While all this drama—story of Ruth

Happens to go into Boaz’s field

•           And eventually becomes “kinsman Redeemer” one who can buy their land, marry Ruth, and have children to carry on the name of the family

•           No matter how difficult personal circumstances may be

•           When younger wanted to marry a Philistine woman, it did not go well, and he ends up killing a thousand of them and given a great victory

•           Both temples share a unique design; two central pillars supported the roof. The pillars were made of wood and rested on stone support bases. With the pillars being about six feet apart, a strong man could dislodge them from their stone bases and bring the entire structure down.

•           Judges 19 story of Levite and his concubine, revenge for her death almost destroying a tribe, kidnapping wives for warriors

•           Battles recorded by major powers, who refer to Israel, Hebrews, the basic outlines and timelines confirmed

•           As the book of Judges shows, when “everyone did what was right in their own eyes” it led to every imaginable form of sin, warfare, oppression

•           Personal self-indulgence spills over into the lives of others

Why did it go so wrong?

•           We are created beings and we function best when we do things the way our Creator intended.

To challenge our assumptions, think about our Creator—in the Bible—go back and listen to why we can trust it

•           Promised a Savior when humanity sinned and the entire OT that we are studying is one long story of the preparation for the birth of Jesus who would be that Savior.

•           He was fun at a party; kind to the hurting; he healed sick people, fed hungry people, was a teacher who knew his scriptures and traditions, but who put new meaning and understanding into them when he preached.

More about this one we are to trust

•           The TV show where people could call—a lifeline…. if you can tap into knowledge you don’t have, the greatest resources

•           We have a choice—no matter what might be happening in our crazy world, individual actions matter.

•           They matter to the people around you, maybe in a big way like one of the judges, but most likely for most us maybe like Ruth simply living a life trusting God

•           But of course, what Ruth didn’t see is that her life was part of a Great Story of Salvation God was working out—she was the great grandmother of King David, the early ancestor of Jesus

•           None of us see our part in the Great Story God is writing, but all of us like the Judges, like Ruth can simply trust God as clearly as we understand his will in daily tasks, as Ruth did and willing to follow him in ways that might seem impossible as victory did for Gideon.