You are here: Home / Bible 805 Podcast / Last messages of judgement and hope—Isaiah & Jeremiah 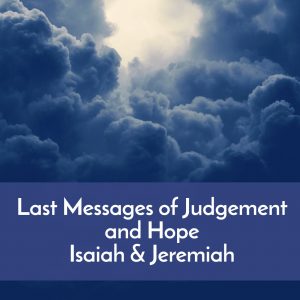 People ask if it really matter if the events talked about in the Old Testament took place in the times and ways that are described in the Bible?
And some wonder if it isn’t the spiritual message of these stories that is most important?
In this podcast, we are going to talk about how it does matter tremendously that the Old Testament describes true stories that took place in recognizable places that we can date in true history.
Once we understand this, it helps us understand the view of our great God and shows that he can be trusted with the details of our history in the past and the eternity of our future with Him.

To download a PDF of the notes, click the following link:  NOTES Last Messages of Judgement and Hope Isaiah & Jeremiah

God’s patience with Israel and Judah

•           Since they came out of Egypt, over 700 years of reminders of God’s covenant of blessings for obedience; judgment for disobedience

•           Repeated reminders that their personal lives needed to reflect the justice, mercy, and humility of their God

Importance of prophectic view of time

•           ***Remember prophets speak for God and from his time view, present, near future, far future often combined sometimes in the same passage

–        NEAR FUTURE –current deliverance from enemies

•           But for us to get the correct message from the prophets to see the power of their words, we need to date them correctly

•           Wealth of material from archeology—Wealth of documentary evidence, historical writings and discoveries such as Dead Sea Scrolls

•           Came about near the end of the eighteenth century. Supposedly, Isaiah himself wrote only the first 39 chapters before the Babylonian captivity, leaving one of his students to write the second part (chapters 40—66).

•           This was done allegedly sometime after the Babylonian captivity started (after 586 BC). As such, this later date would explain explicit predictions of “Cyrus, King of Persia” in Isaiah 44:28—45:1

•           Refuted by reputable scholarship, Jewish, secular, and Christian; some examples:

•           The Dead Sea Scrolls contain a complete scroll of Isaiah dated from the second century BC. The book is one unit with the end of chapter 39 and the beginning of chapter 40 in one continuous column of text. This demonstrates that the scribes who copied this scroll never doubted the singular unity of the book. Neither did the New Testament authors, nor the early church, as quotations from both sections are attributed only to Isaiah.

•           Astounding when correctly dated and placed in historical context

•           Isa.44:24 I am the Lord,
the Maker of all things,
who stretches out the heavens,
who spreads out the earth by myself,
25 who foils the signs of false prophets
and makes fools of diviners,
who overthrows the learning of the wise
and turns it into nonsense,
26 who carries out the words of his servants
and fulfills the predictions of his messengers,

•           who says of Jerusalem, ‘It shall be inhabited,’
of the towns of Judah, ‘They shall be rebuilt,’
and of their ruins, ‘I will restore them,’
27 who says to the watery deep, ‘Be dry,
and I will dry up your streams,’
28 who says of Cyrus, ‘He is my shepherd
and will accomplish all that I please;
he will say of Jerusalem, “Let it be rebuilt,”
and of the temple, “Let its foundations be laid.”’

•           Archeological evidence of fulfillment in Cyrus Cylinder, now in the British Museum

Setting of Isaiah—kings who ruled

•           Another powerful archeological verification of scripture

•           Portion of the Sennacherib relief, which depicts captives from Judah being led into captivity after the Siege of Lachish in 701 BC

But this did not happen to Jerusalem

•           Does not admit defeat, but does not talk about conquering Jerusalem

•           Specific prophecies about fall to Babylon, captivity, restoration under Cyrus

•           Ending of life, martyred by Manasseh, son of Hezekiah and one of the most evil kings of Judah—though he later repented

Eternal view of Isaiah (include some of the favs)

Passages from Isaiah showing the scope of eternity

Isa. 43:27 Your first father sinned;
those I sent to teach you rebelled against me.

Isa: 14: 12 How you have fallen from heaven,
morning star, son of the dawn!
You have been cast down to the earth,
you who once laid low the nations!
13 You said in your heart,
“I will ascend to the heavens;
I will raise my throne
above the stars of God;
I will sit enthroned on the mount of assembly,
on the utmost heights of Mount Zaphon.[b]
14 I will ascend above the tops of the clouds;
I will make myself like the Most High.”
15 But you are brought down to the realm of the dead,
to the depths of the pit.

For to us a child is born,
to us a son is given,
and the government will be on his shoulders.
And he will be called
Wonderful Counselor, Mighty God,
Everlasting Father, Prince of Peace.
7 Of the greatness of his government and peace
there will be no end.
He will reign on David’s throne
and over his kingdom,
establishing and upholding it
with justice and righteousness
from that time on and forever.

•            Isa. 53 Surely he took up our pain
and bore our suffering,
yet we considered him punished by God,
stricken by him, and afflicted.
5 But he was pierced for our transgressions,
he was crushed for our iniquities;
the punishment that brought us peace was on him,
and by his wounds we are healed.
6 We all, like sheep, have gone astray,
each of us has turned to our own way;
and the Lord has laid on him
the iniquity of us all.

•           “These people come near to me with their mouth
and honor me with their lips,
but their hearts are far from me.
Their worship of me
is based on merely human rules they have been taught.

•           Isa. 26:3 You will keep in perfect peace
those whose minds are steadfast,
because they trust in you.
4 Trust in the Lord forever,
for the Lord, the Lord himself, is the Rock eternal.

The renewal of all things

•           Isaiah 51:11 Those the Lord has rescued will return.
They will enter Zion with singing;
everlasting joy will crown their heads.
Gladness and joy will overtake them,
and sorrow and sighing will flee away.

•           Isa. 65:17 “See, I will create new heavens and a new earth. . . . Before they call I will answer;
while they are still speaking I will hear.
25 The wolf and the lamb will feed together,
and the lion will eat straw like the ox,
and dust will be the serpent’s food.
They will neither harm nor destroy
on all my holy mountain,”
says the Lord.

NEXT: After Isaiah—Manasseh and Amon bad evil kings, then last time of Great Revival

Obadiah & the destruction of Edom

•           But on Mount Zion will be deliverance;
it will be holy,
and Jacob will possess his inheritance.
18 Jacob will be a fire
and Joseph a flame;
Esau will be stubble,
and they will set him on fire and destroy him.
There will be no survivors
from Esau.”
The Lord has spoken.

•           As many as 30,000 people may have occupied Petra during the 1st century A.D. A large earthquake in 363 A.D. destroyed at least half of the city. Petra never recovered from this destruction.

•           “Although they have allies and are numerous,
they will be destroyed and pass away.
Although I have afflicted you, Judah,
I will afflict you no more.
13 Now I will break their yoke from your neck
and tear your shackles away.”

•           14 The Lord has given a command concerning you, Nineveh:
“You will have no descendants to bear your name.
I will destroy the images and idols
that are in the temple of your gods.
I will prepare your grave,
for you are vile.”. . . . .

•           2:5 Nineveh summons her picked troops,
yet they stumble on their way.
They dash to the city wall;
the protective shield is put in place.
6 The river gates are thrown open
and the palace collapses.
7 It is decreed that Nineveh
be exiled and carried away.. . . . .

•           13 “I am against you,”
declares the Lord Almighty.
“I will burn up your chariots in smoke,
and the sword will devour your young lions.
I will leave you no prey on the earth.
The voices of your messengers
will no longer be heard.”

•           Preached that the people submit to judgment, surrender to Babylon and live

•           Little to no success-but served God faithfully for decades

Last kings and deportations
Jeremiah witnessed and preached through all of this, told in last chapters of
2 Kings and 2 Chronicles

First deportation: Daniel and friends were included in this

Second Deportation: Ezekiel taken to Babylon at this time.

9. At the turn of the year Nebuchadnezzar returned, captured Jerusalem and replaced Jehoiachin with Zedekiah. Jehoiachin was taken to Babylon ‘with the vessels’ from the temple. 597 BC. (36:10).

12. The Lord brought against them the king of the Chaldeans who killed the young men with the sword in the sanctuary and had no compassion on young or old. They were all given into his hand. 586 BC. (36:17).

•          Discipline never pleasant for us as growing believers

•           Heb. 12:  7 Endure hardship as discipline; God is treating you as his children. For what children are not disciplined by their father? 8 If you are not disciplined—and everyone undergoes discipline—then you are not legitimate, not true sons and daughters at all. 9 Moreover, we have all had human fathers who disciplined us and we respected them for it. How much more should we submit to the Father of spirits and live! 10 They disciplined us for a little while as they thought best; but God disciplines us for our good, in order that we may share in his holiness. 11 No discipline seems pleasant at the time, but painful. Later on, however, it produces a harvest of righteousness and peace for those who have been trained by it.

•           22 Because of the Lord’s great love we are not consumed,
for his compassions never fail.
23 They are new every morning;
great is your faithfulness.
24 I say to myself, “The Lord is my portion;
therefore I will wait for him.”

•           If nothing else these books of the prophets challenge us with the realization that much of the current view of Christianity that it should make life easy and comfortable and that God should always do what we want Him to do is so far off.

•           No matter what the circumstances, God is in control and we never have an excuse not to do what He asks us to do

•           Like Jeremiah—follow your calling, no matter what the circumstances—for us today Great Commission given to all.

Jesus Great Commission to us all

•           Then Jesus came to them and said, “All authority in heaven and on earth has been given to me. Therefore go and make disciples of all nations, baptizing them in the name of the Father and of the Son and of the Holy Spirit, and teaching them to obey everything I have commanded you. And surely I am with you always, to the very end of the age.”
Matt. 28:18-20

•           “God authorized and commanded me to commission you: Go out and train everyone you meet, far and near, in this way of life, . . . . .instruct them in the practice of all I have commanded you.

•           Great Commission circles back to the truth of the prophets. As God’s redeemed people he wants us to live in a way that shows we worship only Him (not money, status, job, hobby, etc.) and as we grow in our relationship with Him that it is also reflected in how we treat others (do justice, love kindness, walk humbly).

You are writing a gospel

A Chapter each day

By the things that you do

And the things that you say.

People read what you write,

What is the gospel,

•  May it be the true one that leads people to Jesus.