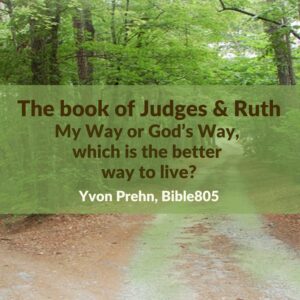 From our earliest days, we want to do things our way.

We don’t want anyone else to tell us what to do.

Though we may appear to go along with rules as we get older, in our heart of hearts we often think we know what’s best for us.

Below is a copy of the podcast, video, and notes.

•       Though it sounds appealing, is this really the best way to live?

•       We’re going to look at almost 400 years of history when an entire nation decided to do it their way in our lesson on…..

The books of Judges & Ruth

My Way or God’s Way, which is the better way to live?

From our earliest days

•           Though we may appear to go along with rules as we get older, in our heart of hearts we often think we know what’s best for us.

The books of Judges and Ruth

•           Judges is a little-studied book in its entirety, but as you’ll see it’s a very relevant one for our world today.

Basic facts about Judges and Ruth

•           Many people often skip these books, or only read selective stories out of them and that’s understandable.

•           Judges is an incredibly depressing book as the people and their leaders go from being a victorious people of God to a people oppressed by their enemies because of their sins.

•           Remember or review the lesson on how to read the narrative/story parts of the Bible.

•           Keep in mind that not every story, very action recorded in the Bible is something to follow.

•           We are supposed to understand as we see the people’s actions and consequences, why this is happening and how people ought to behave.

•           And from their examples, successes, and failures apply the lessons to our lives.

Be especially careful in reading about “heroes”

•           When you do it may be surprising to see a more complete picture of the life of characters such as Gideon and Sampson.

•           God is the one who shows mercy, who uses imperfect people to accomplish His plans.

Book opens—
Joshua died and passed on leadership to…….

•           Judges 2:7 The people served the Lord throughout the lifetime of Joshua and of the elders who outlived him and who had seen all the great things the Lord had done for Israel.

•           10 After that whole generation had been gathered to their ancestors, another generation grew up who knew neither the Lord nor what he had done for Israel.

•           We are never told why he (and the other elders) didn’t intentionally train a leader(s), but we see the results in the next 400+ years from the death of Joshua until the Saul becomes king.

I am asking why this was?
Contrast Moses and Joshua

•           I’m sharing this as simply my opinion and not a categorical truth from scripture, but as I’ve thought about it, why one passed on strong leadership and the other didn’t.

A big difference in one area

•           Moses preached to the people continuously about how they ought to serve God.

•           That’s very good—but he basically says—My family will serve God, but whatever the rest of you do—that’s your problem.

•           I can’t help but wonder if the history of Israel for the next 400 years would have been different if Joshua had cared as much about instilling the commands of God in the people as Moses did.

That was then, this is now, and what lesson can we learn from them?

•           We need to be intentional, consistent, and persistent about Biblical truth we pass on to coming generations.

•           We do not live in times favorable to the Christian faith and I don’t imagine it will get much better.

•           I think we need to very seriously warn coming generations of how hostile our culture is to our faith and how we must respond by knowing and living God’s Word.

•           We need to be more interested in preparing and challenging the next generation than in making sure they have a good time.

Back to Judges, here is the overall pattern of the book

•           Serving other gods results in moral deterioration that you see especially in the later chapters of Judges.

•           God punishes them by allowing the people who should have been conquered, such as the Philistines, to oppress them.

•           God responds and sends a “judge,” and they are delivered, but then the cycle repeats itself when they forget God’s deliverance and go back to worshipping other gods.

Who were the Judges?

•           Overall, Warren Wiersbe defined a biblical Judge in this way: ruler, military leader, one who decided in judicial matters, over limited areas. No income or taxing power, not a hereditary office. Called and empowered by God.

•           Warren Wiersbe says regarding Judges that “the monotony of Israel’s sins can be contrasted with the creativity of God’s methods of deliverance.”

•           He is victorious though the war ends with the opposing general being killed by Jael,  a Kenite woman (Kenites were relatives of Moses).

•           Until Samuel, she is the only one who was actively serving God when called to deliver the people.

•           Her life shows, and it is interesting that there is no comment she was unique or unusual, that women did lead, prophesy, and hold a position of spiritual authority and power in the Old Testament.

•           The Midianites were also descendants of Abraham, they were the people Moses fled to, but something had gone very wrong in their relationship with the Jews.

•           Gideon protests—if God is with us, why all the problems? The Lord doesn’t answer, simply calls him to be the deliverer.

Then the situation with the fleece….

•           Lesson here—if you don’t think you have the resources to do what God wants –that might be precisely the point, precisely where God wants you to be.

While all this drama—story of Ruth is taking place

•           Important—this was obviously a city that still revered and lived by God’s law.

•           Ruth and Naomi have no money, no income, no protector, so Ruth goes out to glean [gather the leftover scraps] in the fields.

•           He is her “kinsman Redeemer” one who can buy their land, marry Ruth, and have children to carry on the name of the family.

•           When younger married a Philistine woman (expressly forbidden), it did not go well, and he ends up killing a thousand of them in revenge.

•           After many deceptions he finally reveals the secret of his strength—his hair—he had been a Nazarite from birth.

•           Two central pillars supported the roof. The pillars were made of wood and rested on stone support bases.

•           With the pillars being about six feet apart, a strong man could dislodge them from their stone bases and bring the entire structure down.

More reminders that these early stories are not fairy tales,  but real people and places

•           See other lessons for the differences in the historical accuracy of the Bible as compared with other scriptures.

•           A group of Danites comes by, takes the Levite with them;  they go to another city and slaughter everyone.

•           Judges 19 is story of Levite and his concubine, who is killed brutally. Then in revenge for her death, a tribe is almost destroyed and because of a foolish vow, they kidnap women to be wives for the warriors.

•           Ends with the summary statement I shared at the start: In those days Israel had no king; all the people did whatever seemed right in their own eyes. Judges 21:24, NLT

•           We have a choice—no matter what might be happening in our crazy world, individual actions matter.

•           So here’s what I want you to do, God helping you: Take your everyday, ordinary life—your sleeping, eating, going-to-work, and walking-around life—and place it before God as an offering. . . .Don’t become so well-adjusted to your culture that you fit into it without even thinking. Instead, fix your attention on God. You’ll be changed from the inside out. Readily recognize what he wants from you, and quickly respond to it. Unlike the culture around you, always dragging you down to its level of immaturity, God brings the best out of you, develops well-formed maturity in you.

Our choices matter, now and forever

•           They matter to the people around you, maybe in a big way like the Judges did to the people they delivered, but most likely, like Ruth, our actions matter tremendously for those close to us.

•           Even more, Ruth didn’t see that by trusting God, she was part of a Great Story of Salvation God was working out—she was the great grandmother of King David, the early ancestor of Jesus.

•           None of us see our part in the Great Story God is writing, but all of us like the good Judges, like Ruth, can simply trust God as we follow his will in daily tasks and trust Him to take our small efforts and use them as He pleases to work out His redemption of our world.

•           I imagine when we look back from heaven at the results of good choices we’ve long forgotten, there will be surprises.

FINAL SLIDE for PODS with devotion

•       Please check out the notes from this lesson, they are in Downloadable PDF format and other materials at www.bible805.com