You are here: Home / Bible 805 Podcast / How is the historical truth of the Christian Bible unique? part two. . . a comparison with the Muslim and Mormon scriptures 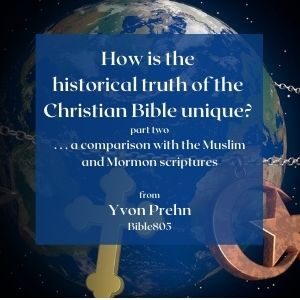 How do the Koran and the Book of Mormon compare to the Christian Bible?

They are much more recent than Hindu or Buddhist scriptures, so aren’t they more trustworthy?

According to the writings of each religion, not only are they more trustworthy, but both religions claim that they are the most correct scriptures. By the law of noncontradiction, they can’t both be true. So, how do we evaluate them to determine whether the trustworthiness of each?

That’s what we will talk about in detail in our lesson/podcast today. The podcast is below and below that the transcript of the lesson.

How is the historical truth of the Christian Bible unique? part two
. . . a comparison with the Muslim and Mormon scriptures
Teacher: Yvon Prehn, Bible805