You are here: Home / Bible 805 Podcast / How do historians determine Truth? . .why geography, archeology, artifacts, and documents matter 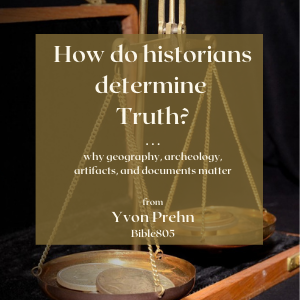 How do historians know what is true?
Do they write up whatever sounds good to them?
Or do they listen to legends or whatever do they do?

In a previous lesson, we talked about the importance of truth and how truth is that which corresponds to reality.

They do it through evidence and in this podcast we’ll talk about the evidence of geography, archeology, artifacts, and documents.

Below is the podcast and below that a transcript of it:

How do historians determine Truth?
. . .why geography, archeology, artifacts, and documents matter