You are here: Home / Bible 805 Podcast / Through the Bible / 1 Samuel / David—great sins and great mercy but always a heart in the right place, part 2 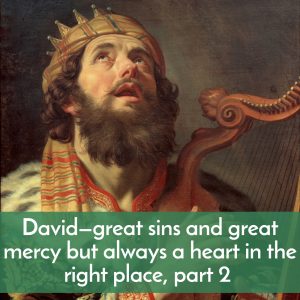 Have you ever felt you can’t forgive yourself or that you’ve don’t things so that God can never use you for anything significant?
If so I have great news for you!
We will continue our look at King David in today’s lesson. His sin with Bathsheba was only one of the serious sins in his life and yet, he ended his life forgiven and greatly used by God.
We’ll learn about God’s great forgiveness and love in our lesson today and how we can learn to forgive ourselves and press ahead to do things that will give our lives meaning and joy no matter what we’ve done.
Below the podcast is a PDF of the notes and following that the notes are printed out.

David—great sins and great mercy but always a heart in the right place, part 2

·         Previous lesson we talked about how David was a man after God’s own heart and lived much of his life in constant awareness, if not obedience to God

·         Bible previously in the law had numerous commands on how children should be raised, taught about the Lord, punished when sinned

·         Finally does, but obviously Absalom harbored resentment and hate

·         God delivers David; Absalom killed; David mourns until Joab challenges him to man up and be grateful

·         But David victorious and continues to fight battles

·         Numbering the people—sin with HUGE consequences

·         Much confusion over this situation on exactly what the sin was

·         Regardless, not done according to proper way for a census in the Law which also involved the temple “ransom” to be paid

·         “No, but I will surely buy it from you for a price; nor will I offer burnt offerings to the Lord my God with that which costs me nothing.” So, David bought the threshing floor and the oxen for fifty shekels of silver. And David built there an altar to the Lord and offered burnt offerings and peace offerings. So, the Lord heeded the prayers for the land, and the plague was withdrawn from Israel.” 2 Sam 24: 24-25

·         On ones such as the killing Uzzah; the Gibeonite revenge and the execution of Saul’s grandsons

·         We don’t know the entire story—commentators can sometimes help, e.g. that Uzzah an instance of pride (he had taken care of it for months, his job to do it) on the revenge on Saul’s descendants (he had slaughtered people Israel was sworn to protect, perhaps those who were killed had taken the lands illegally and benefited from it)

·         God’s commands serious—what he says is WRONG is wrong, no matter how much times change and how politically inconvenient it is to believe that.

·         Application today– “progressive Christians” are not Christians, “Christ’s ones”

·         God does not change, and the exclusivity of his demands and that Jesus is the ONLY way of salvation is the same

·         It’s hard to talk about this but it must be done HIS way, not ours—kind of like the Tower of Babel—choosing a unity but one that is not God’s way—

·         Also, very hard to talk about this because so often winsome people, wonderful writers, speakers can say things that are totally wrong

·         Again, and again if we are going to speak, we’d better be right and in line with what the Bible says, properly exegeted

·         1 Chron 5:22 And David said, Solomon my son is young and tender, and the house that is to be builded for the Lord must be exceeding magnifical, of fame and of glory throughout all countries: I will therefore now make preparation for it. So, David prepared abundantly before his death.

·         Organized all the workers, Levites, all involved in Temple work into groups and schedules to do the work

·         Next David and the worship leaders selected some from the family of Asaph, Heman, and Jeduthun for special service in preaching and music. 1 Chron 25:1, MSG

·         Assumption that in organizing all    the music, he wrote and finalized many of the Psalms that most likely were only in oral form prior to this.

·         1 Chron 28: 11-19 Then David presented his son Solomon with the plans for The Temple complex: porch, storerooms, meeting rooms, and the place for atoning sacrifice. He turned over the plans for everything that God’s Spirit had brought to his mind: the design of the courtyards, the arrangements of rooms, and the closets for storing all the holy things. He gave him his plan for organizing the Levites and priests in their work of leading and ordering worship in the house of God, and for caring for the liturgical furnishings. He provided exact specifications for how much gold and silver was needed for each article used in the services of worship: the gold and silver Lampstands and lamps, the gold tables for consecrated bread, the silver tables, the gold forks, the bowls and the jars, and the Incense Altar. And he gave him the plan for sculpting the cherubs with their wings outstretched over the Chest of the Covenant of God—the cherubim throne. “Here are the blueprints for the whole project as God gave me to understand it,” David said.

·         20 David also said to Solomon his son, “Be strong and courageous, and do the work. Do not be afraid or discouraged, for the Lord God, my God, is with you. He will not fail you or forsake you until all the work for the service of the temple of the Lord is finished. 21 The divisions of the priests and Levites are ready for all the work on the temple of God, and every willing person skilled in any craft will help you in all the work. The officials and all the people will obey your every command.”

·         Men came from every tribe and many surrounding nations: Moabite, Ammonite, (sometimes peaceful, but often sworn enemies) “Uriah, the Hittite” (a powerful empire, enemy of Israel, displaced after Exodus)

·         A picture of the church perhaps encompassing every people

·         Final application—David did not let his sin define his life

·         7 O Israel, hope in the Lord!
For with the Lord there is steadfast love,
and with him is plentiful redemption.
8 And he will redeem Israel
from all his iniquities.

·         David went back to a love of his youth Music, the Psalms (perhaps merely oral before, probably…. then committed to writing—but now in a much more mature way AND in a way to leave a legacy to others

·         What has God called you to do? I will go to this—teach, tutor, PRAY—many of you listening, able to use tools—pods, video, blogs—leave behind blessings

·         But many of you, serve in ways I can’t imagine because God has a unique plan for everyone.

·         I’m sure David has an eternity of surprises of people in heaven by meeting those who have been blessed by what he wrote in the Psalms—you never know who might be blessed by what you do!

·         No matter how great your sin—and David committed many—bad parenting, adultery, murder, pride—The same God who loves and forgave him, loves and forgives you—accept it and rejoice in it!

·         Up off your face and fulfill your calling with a clean, free, forgiven heart.